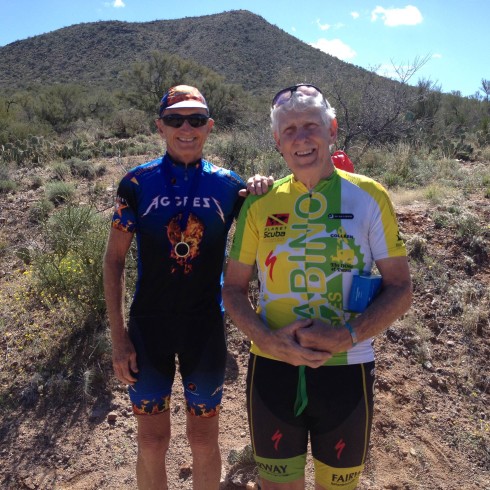 Day 1 TT: Driving up to the TT course on Saturday was a route I’d taken many times last year, so this time even with the light southerly breeze gently flowing across one of the more beautiful parts of southern Arizona ;), I was relaxed, knew what had to be done and felt as if I was in my element. I’m finding you never get completely comfortable riding TT’s, but somehow I look forward to the event, just you, the bike, and the elements. With a little warmup on the trainer, then a spin on the road I was careful to keep track of time and headed to the start line. Once off and heading into the wind I focused on keep cadence high and not grinding the pedals too much into the wind. I caught my 30 second man before the turn around, managed to not crash (always a thought that goes through my mind). Now back inbound time to turn the big gear, get to the 11 and keep it there. On the way back in I caught several more of my Cat 4 group and felt good with the effort 6th out of 12 not bad. I find it interesting to geek out in the numbers. For those that care:

Day 2 RR: I’m learning things don’t often go as planned. In the weeks leading up to the race it was shaping up to be Gus and Big Mike beating up on the competition to deliver me as close as possible to the front of the group. That way I could showcase my Canvendish-esque sprint (cough, cough). Well, with Mike nursing an injury it was up to Gus to try and establish the blue-train of Aggress dominance in the Cat 4 peleton. The first couple laps were tentative ones for me, after years of solo riding the TT is my comfort zone, so I was keeping myself to the edges of the group, trying to find my way. Occasionally thoughts of “Do I even belong in this group?” would pass through my head. The first couple of laps seemed tame with several guys trying to go off the front, it helped to know who to mark. If the marked guys didn’t jump then I figured the race wasn’t going anywhere. I just kept my eyes on them and sat in. At the end of the second lap we passed the Cat 3 group and once our peleton reformed I looked around to find Gus and suddenly felt a little lonely. Not sure what happened to him I figured I would keep marking the Tri-Sports guys as there was 3 or 4 of them trying to control things. As we rolled through the next lap and a half as the group started to thin out, I felt more comfortable and more confident in riding the bike into narrow spaces holding my ground when needed. Then during the middle of the 4th lap as we turned onto Old Spanish Trail I’m not sure what happened, lapse in thinking, surge in the group, probably both at the same time and I was in a place we’ve all been from time-to-time, watching the race head up the road without you. Next the wheel support truck passes you, then other riders who are hating life much more than yourself as you fight past them to try and regain the group. Well is was off on a fight-back that took all of OST and up Pistol Hill. Keeping the power up and always keeping the group in sight, about a quarter mile ahead of me. Sloooowwwly I started making ground on the climb, then over the top, then ground the biggest gear I could on the downhill portion, waved at Gus and Jonathan on my way by the cars and rejoined by the cattle gaurd as we headed into the 5th lap. Sat in for the next lap eating and drinking for what I knew would be an increase in pace during the final lap. During the last part of the final lap, it was facinating to watch the surges and reactions within the group. Jonathan used the card playing analogy and, thinking back, that’s what this was, who was gonna lay down an attack that was gonna stick, did anyone have the legs to make it up that hill by themselves. It’s a learning process, and I learned a ton just by watching those last couple miles. By nature I am not one to gamble or make a bold move, so here I was in reactionary mode, basically a spectator…. this time. As the group turned up the hill I was happy to make it with the bunch, passing some, but earlier in the day Cav used all the power I was trying to channel for my sprint to the line, I finished finished 14th out of 30 (I think), BUT never mind the placing, I learned so many things in those last 4 miles, next time I will be willing and ready to get out on that dance floor and give it a whirl, let’s dance!