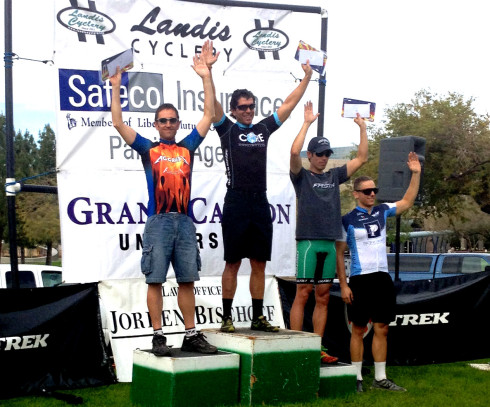 I felt great at the start today, no nerves and excited to get to work. I know the 2nd place rider Henry very well and we worked out some plans before the race to put some time on the leader. However he flatted first lap just before the turn to the climb. So like good sports Henry2nd, Rex 5th , and myself started drilling it to make sure of a nice gap. It worked then we put in a strong climb which brought the group down to 20 very strong riders. Apparently there was a crash by the chasers on the first climb. That put them further behind.
We cooperated as a group keeping a 25+mph pace for the loop with a slug fest for the KOM points on the second climb. I spent a lot of matches there to no avail taking a very close 4th. Only inches between the four of us.
Third lap the group refused to keep the pace. Henry, Rex, myself and one other guys had to do some work. I tried not to go too hard on my pulls so I could save it for the finish. We were told that Karl 1st place. had a strong chase group and were gaining on us.
Once we got to the climb I sucked wheel then would attack to dropped some riders. It worked maybe ten of us were left on the final steep climb. I unfortunately didn’t have enough for the final sprint and came in mid pack.
Henry got the KOM points and first place for a solid lead.
Too bad I’m not a Crit guy yet but ill do my best tomorrow.

I’m just starting to get comfortable with Crits and this was the smoothest yet, till the second to last lap then it all went crazy! Each lap I improved my position without wasting energy. I was feeling more comfortable and finding the best lines.
I was really enjoying the encouragement from family and friends.
Then second to last lap first corner guys misses the turn on outside and has to bunny hop the curb and off the road into the fans. We get through the next right smoothly and I’m sitting in sixth as we enter the south east sketchy corner when “crack” riders to the right of me go down and hit my rear end. I recovered quickly but was now at the back on the fastest lap yet. Going into the final corner of this lap 4-5 guys lose it and decide to cover the road in front of me with bodies and bikes. I was forced to come to a complete stop and the group was already almost at the finish line starting the final lap.
I put my head down and road as fast as I could. I was starting to catch up but it just wasn’t going to happen. I was really upset because I had conserved my energy and was excited for the final lap.
As it turns out Henry 1st pl GC got a flat on 3rd to last lap. I was stuck behind the wreck on the 2nd. They neutralized the final lap and we kept our GC Positions. Yeah! I was so happy.
Great job to all the Aggressors out there!

TT: 24th from 60.  Reached deep, 25.6mph.
RR: thought we’d pulled the break back.  Followed wheels throughout.  Mistook feed zone for final sprint and went solo up left seeking the win, but 200m beyond lay the finish.  I fought to take 7th, but no… there were four up the road.  Attacks were constant from GST to break Luis Ambruel (sp?) and I opted to mark him / lead group as I only had one real match and I tried to save it for the sprint.
Crit: rode as if I was going to win.  Stayed 3rd to 5th wheel for the first third, but too many times closing, chasing the surges and I retreated to rest.  Dumb idea.  Never really moved back up.  Got downright dangerous skidding out and hitting some raised concrete at 29mph.  Just rode to solidify top 20.
Felt good this weekend.  The training is beginning to pay off.  Wonderful weekend for Tim, Doug, Rick and Michael.  I’m planning on signing up for a proper ass kicking at Gila.
– Kurt 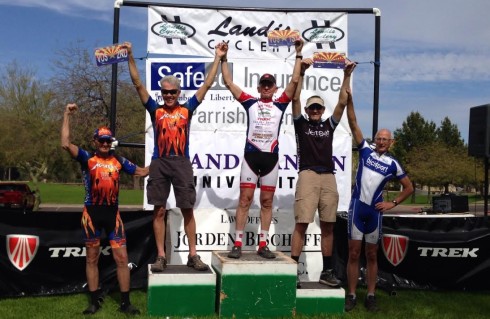 Rick 3rd, Doug 4th
Rick and I made it to the last climb with, what I think was, the lead group of about 20 of the combined M55+/M65+. Bill Hydinger got first, Ken Louder second. Rick was with the other two M65+ at the finish and should get the same time. However I was dropped with about 1-1.5K left and lost precious time to Bill and Rick. Looks like Rick and Bill will be very close for 2nd and 3rd, and I think I may drop from 2nd to fourth by a minute, or less. Will have to wait for the posting of the official results.
On a brighter side (for me), I had my best time in this race and cut almost five minutes of my time from last year (from 2:07 to 2:02), and upped my average speed for the 46 mile race from 22.0 to 22.7. So even though I may not be on the podium, I feel pretty good about the effort.
Should be a fun crit tomorrow!