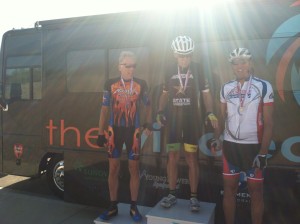 “And the beat goes on …” Sony and Cher (not sure if many of you remember them??) had more success with that than I have.
I’ve done the State Crit three times, in the last four years and today, I came in second for the third time. I have to admit, second in the state should be somewhat satisfying, but I’ve found each year to be less so. Briefly, here’s what happened.
The race was a combined field of the M60+,65+,70+ and 75+. Rick and I were representing Aggress in the M65+ and without Reg Dowdall in the race this year (out with a heart attack) it was pretty clear that our primary competition would be Jack Dillon and Dick Snyder.
On the first lap, a number of riders were dropped and we eventually would lap them. There were a few attacks but they were short-lived. The most promising was when three 60+ guys (Puchi, Mulvaney and McCormick) took off, with about four laps to go. They got a good gap on the field and it took me almost a half lap of all out effort to catch up with them … unfortunately, when I caught them, they sat up and the field eventually caught us … Puchi later told me,  Mulvaney wouldn’t work with them so they sat up.
For many laps Jack Dillon was on the front and, based on that, my plan was to watch him get tired and on the last lap to beat him in the final sprint. So much for plans. He didn’t get tired! Jack took off on the last lap and Franz Hammer quickly  followed. I got on Franz’s wheel and we caught up with Jack with about a half lap to go. Franz faded and a small group of 60+ guys caught us. When Jack accelerated again, no one moved to close the gap. I hesitated too long and Jack got a considerable gap over me. During the final sprint I closed the gap considerably, but there wasn’t enough real estate to finish the deal .. Jack first, Doug second, Dick Snyder third. Lesson learned.
Unfortunately, Rick had a different problem. As he was working to close the gap on the lead group, he caught his wheel and went down on the backside of the course. He managed to get up and finished the crit, securing fourth place. Fortunately, Liz was at the finish line to clean up Rick’s road rash.
This was my last race for the season and I’ll be having the rotator cuff surgery on April 30. Good luck to all doing Tumaccori tomorrow and the State RR. Go Aggress!