Report via Rick
The Old Pueblo Grand Prix was a great event; a high energy rip around downtown Tucson on a Sunday afternoon.  Doug, Mike Leo and I represented, and were joined by other Aggressors (Liz, Kelly, Pete, BrYan) drawn to the Flames.
Master Men 55+, and most of the women, started the event off at 12:30, with heat and wind thrown in for some spice.  Course issues (pavement, turns, etc.) turned out to be less of a challenge than I was expecting.  The pace was the challenge.  There were 12 riders in the M55+ field and 5 of us were dropped on lap 2; I could not hold the pace.  A few laps later we picked up Doug, who had tried to hold the pace, but eventually got spit out.  For a brief moment I considered getting some rotation going to gradually close on the leaders, but then Norm Kibble and another rider dropped off the back and shortly DNFd, so we were 4.  There was one crash during our race; two of the women went down and for a few laps there were emergency vehicles and personnel at the edges of the course but the race continued.  I ended up pulling the chase group for most of the race and I felt good for the entire event but I cannot match the pace imposed by the likes of Dwight Nelson, Joe Suida, and Larry Hansen (Oh Well!).  Final result; 9/12. 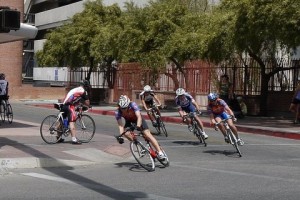 Doug on the front

Mike M: So on the last lap, I saw an opening on the right side at about the start/finish, and I gunned it. I gained about seven places, and was about to jump into the lead (and would have kept it) when the turn came up. iIliterally had no where to go, and touched my brake. Slid around the corner, and almost into Alex Strickland. By the time I righted myself, I was in the middle of the pack again. Finished 11th, one stupid place out of winning money. What a great day of awesome bike racing, though.
Leo:
I went 45+ and Cat 3 which was combined 3/4 (61 people).  Back to back.

I had been sick all of last week, a virus that felt like strep.

45+ was fast, with hard winds from the South as usual, which made the sections on Stone and Church the potential graveyards.  Lots of support from the Aggressors there, which really helped with the pain.

I went well in the pack, feeling great in the corners, but struggling with the accelerations on Congress, Church, and Stone.  I actually attacked at one point, merely setting Daly up for a prime!  At three laps to go Kroese went off the front for good, and I couldn’t hold the wheel anymore with one lap to go (half mind to rest for the next race).

This put me at the back of the 3/4 group for the start with no time to rest.  I managed to stay somewhat on for the first few laps, but having to go around all the guys popping corner after corner did me in.  Mike went super strong and must have placed.  Elliot was with me for awhile, but had the juice to get into the front group and stay there.  Great day!

Literary note:  I’ve been reading the Iliad, and there is an fantastic description of a chariot race toward the end in Chapter 23 (Lattimore translation).  Achilles’ buddy Patroklos gets killed, and Achilles puts on his funeral finally, including a feast and games before he goes and gets killed himself (which he knows is coming by the way).  He had vanquished Hector at this point and dragged his body back to camp to dis the Trojans.  They have a big funeral pyre, burning 12 Trojans along with Patroklos.  In any case, Achilles then puts some major booty on the line for a five up ’round the post chariot race.  Two wheeled carts with two horses.  This story is like 2500 years old, describing things that may have happened a thousand years before that, but it could be one of the races we do now.  Full on battle, crashes, cheating, fighting, cursing, but then when it’s over, the guys trade prizes, patch things up and move on to the boxing.  Really cool story.