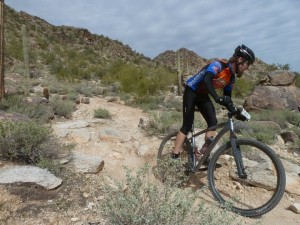 From the newest Aggressor, Aaron Prudler:     I am currently in the hunt for the MBAA Singlespeed Open state championship, and this weekend was race #3 in the series. It was also my first race representing Aggress! The race took place at White Tank Mountain Park, west of Phoenix. The Cat 1 course consisted of 4 perimeter loops of the competitive track, each of which included two technical sections and one good climb, especially at race pace! I showed up Saturday morning to see that the pros had come out to play in my cat. in the form of Dejay Birtch and Tom Ament…….two Very strong riders…..OUCH!….I was in for a tough one. After some much needed encouragement from my amigo, Beto Villegas, I was ready for the start line. Tom Ament (Vassago Bikes) jumped out in front off the start with Mike Haas (Exhale Bikes) on his wheel, followed by Dejay Birtch (Ergon/Niner), and myself rounding out the top four. Dejay Birtch and myself were content to start off at a strong pace without waisting ourselves, however Tom Ament attacked from the start, leaving us no choice but to roll with it. After a few miles, Mike (Exhale) got hung up in some rocks, and Dejay and I made our move into second and third position. We dropped Mike almost immediately, and increased the gap over the next few miles. Dejay took the lead before the first Tech section, and I was able to maintain contact with he and Tom through the first big climb, however lost contact by the end of the second real technical section. Mike was not far behind me, and I knew I had my work cut out for me, if I was going to hang onto third and podium with the pros……….I wanted this one BAD! By the the time we came around for the big climb the second time, I looked back to see that Mike had put some time into me…….It was time to go for the mental attack! I hammered the climb hard, and made it appear that I wasnt suffering, but of course I was! After talking with Mike after the race, it worked perfectly. I never saw Mike behind me for the rest of the race, however I left nothing to chance and left it all on the course. Tough,considering I lost a bottle on the course, and finished the last lap and a half on about four sips of Accelerade! I was unable to make contact with Tom or Dejay, and finished in third place, which I was incredibly excited about for many reasons, two of which are: 1.I podiumed with two seasoned, sponsored pros, and 2. This race put me into the lead in the state championship series! 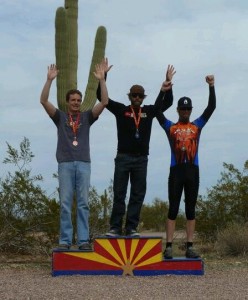