Did the Scottsdale Cycling Festival this weekend; an upscale venue with lots of exhibitors, good food, hotties, etc.– 10-4 Rick E. 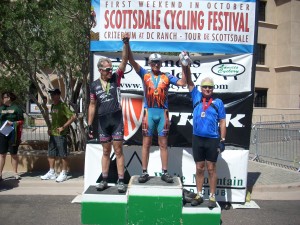 The UCF sanctioned Criterium was held Saturday at the cutesy shops area at DC Ranch; a 1 km circuit with 7 turns including a 180 at the top of the hill.  As usual, 50/60+ rode together and most of the usual characters were there..  I implanted myself toward the rear of the peloton and tried to stay on Bob Pongratz’s wheel as much as possible.  Attrition gradually reduced the size of the pack from around 18 to 10-12 by 4 laps to go, and I was the only 60+ guy still in the pack.  At 3 laps to go Bob Pongratz and Steve Cullinan made their move to the front.  In perfect Pavlovian response, I almost went with them, but then some late season wisdom enveloped me in its warm embrace and I realized that my race was already won as long as I didn’t crash and that I would certainly not be able to complete the remaining 3 hill2/3 climbs on the backside of the circuit at the now faster pace, so I just hung there at the back of the pack and cruised over the finish line with a big smile while Cullinan and Pongratz established a modest gap from the rest of us and sprinted it out for the 50+ win.  Got no cash, but did get a fancy medal (Hmmmmm), a decent gift card for Landis Cyclery, and a pretty nifty front/rear LED bicycle lighting system.

Sunday was the 70 mile Tour de Scottsdale fun ride.  No platinum passes for this ride.  David Benjes simply set up self-designated start chutes based on your own estimated ride time supplied at registration.  It actually worked out reasonably well.  A critical feature that made it work was the rolling start.  Speed was held at about 15-20 mph for the first mile and a half by a motorcycle cop at the front of the peloton.  It helped avoid the insanity you frequently see right off the start line in El Tour.  The first 10 miles was uphill to Cave Creek and the peloton I did most of the ride with actually formed up and got organized fairly quickly.  We could see the lead peloton with a few dozen or so riders which had now formed up in front of us and we were steadily rolling by all the bs-ers who had lined up ahead of us in the sub 3 hr start chute.  Most fell behind us…   What were they thinking?…. a few were able to hang on.  A gentle climb from Cave Creek East to Pima Rd followed and we continued to roll by detritus from the lead peloton.  Pima Rd was a downhill rip to Dynamite Rd and nothing much happened.  By now the lead peloton was established and rolling and gradually pulling away from us.  Dynamite Rd was several miles of climbing followed by several miles of descending.  I felt pretty good at this point and did my last significant pull approaching the Dynamite Rd summit. We did acquire 3 more pieces of detritus from the lead peloton during the climb.  Our peloton numbered 70-80 at this point.  A right turn at Tonto Verde and then miles of slightly downhill gentle rollers into Fountain Hills.  Since I knew the route was going to go right by my Sister’s bar/restaurant in Fountain Hills I mad sure I was in the #1 position at the front of the peloton going by her place.  And yes! There was my family lined up in front of the bar watching me cruise by at about 30 mph (slightly downhill right there) in all my glory at the head of a mass of cycling humanity.  Does it get any better?  As soon as we were out of sight I slunk back to the middle of the peloton and re-buried myself.  From Fountain Hills we turned West on Shea Blvd and commenced a major hill climb up Shea.  My little glory stunt now came back home and I started slipping back as the peloton fractured going up the hill.  By the summit the peloton pieces were spread out over half a mile and I was about 2/3 of the way back in a group of 4.  However 2 monster Carlos Obrien riders summited 100m behind us so we just patiently coasted until they arrived  and tucked in behind them gradually accelerating to 43 mph going down Shea back into Scottsdale.  Ahhhhh!  The physics of downhill mass!  By the turn North at 136th St we had re-acquired another dozen or so riders from the fractured peloton and numbered close to 20.  The remaining miles back to DC Ranch were mostly flat and mundane and nothing much happened.  Toward the end we actually got a little “chatty” and the temperature escalation was starting to become an issue.  The girls with ice-water trays immediately after crossing the finish line were a nice touch and much appreciated.