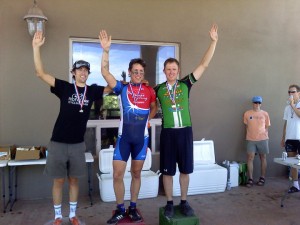 Is that a fricking milk crate podium? Ghetto!

The Arizona City TT Course was the stage for this years Arizona State Individual Time Trial Championship. The course was a 40 kilometer out and back, with a healthy dose of false flat and crosswinds. I had local Cat.2 TT strongman Dave Swanson(Taser/Kenda), who I considered the man to beat, starting only 60 seconds ahead of me. I knew that if I could take time from him on the outbound cross-headwind leg and get him in sight, that I would have a chance to match his speed, which was a big threat. I did the first 20k very fast, and was pushing a HUGE gear (54×12) up the false flat, with a headwind. I saw Swanson coming the other way after the turnaround, and I knew from the split time that I had taken at least 20 seconds out of him. I was able to see him for the rest of the race, and I focused on his silhouette on the horizon. I managed to keep him in sight all the way to the finish, and I knew I had won. I was 1st in the Pro/1 race with a time of 52:49, and was the 1st placed Arizona man over all in the 40k discipline. Dave Swanson(Taser/Kenda) won the Cat.2 race and was around 40 seconds behind me. David Glick(RideClean) and Nicholaus Schreiber(Landis/Trek) filled out the Cat.1 podium.

Rick E. took third and rounded out the podium in his category.  Congrats!