With Elijet nurshing his spawn, Leo, Jeremy and Vic went to Gila.  Photographers seem to have been banned from filming Aggressors, so… 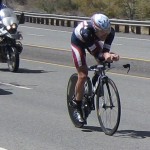 Leo:   This was one for learning/mis-haps.

I crashed in the feed zone on day one.  I chased on, but got dropped at the climb.  80th.

On day two (The Day of the Wind), I dropped my water bottle in the first mile (wind and loose jersey), and then my rear water bottle cage broke… and I thought it was my rear derailleur.  This caused me to back out of the pack at the start of the climb.  This was bad enough, but having chased on somewhat, I then got dropped on the descent.  I then fought for 48 miles.  66th.

The TT gave new meaning to “hump day” as in getting humped up the you-know-what by a supposedly fast bike.  Downhill at 48 with side head-winds with a tri-spoke front wheel is not a good plan.  84th out of 89, stayed 66.

The crit was totally fun despite the hangover.  Great hard fast course.  By the way, don’t take the warm-up lap; you end up starting at the back.  I moved up to 65th!

I was ready for Sunday, but got there late and had to chase on.  I then tore off my thumbnail somehow, and then got relegated for a white line/yellow line violation, right at the base of the big early climb.  Got dropped, but chased on.  I then rode through for about 30 miles, surviving some hard stuff.  A break developed, and I jumped.  20 miles of beautiful hell ensued, and I finally cracked near the base of the climb, and got dropped at the first switch-back.  I climbed steady/slow and rode to, you guessed it, 66th!  I finished at 61st place, having moved up each day.

Jeremy would succumb to sickness and withdraw.

Vic made Velonews for real:

I did well on Wednesday to throw down a series of early attacks and get myself into the break, but still finished in 110th place and lost 10 minutes. On Thursday I attacked no less than 3 times in the first 5 minutes of the race, but got nowhere and was dropped immediately on the first climb. I rode the remaining 70 miles to the finish solo. I would get caught by a chase group every 20 minutes or so, but I was so blown that I couldn’t hang on to any of them for longer than a minute. I lost 38 minutes and finished in 156th place. On Friday I had the worst TT I’ve ever ridden, missing my start because I was caught in the UCI Bike Check waiting line, then having nothing but lactic acid in my legs for the entire first half of the TT, then hitting my knee on my handlebars sprinting up the hill to the turnaround. I lost 14 minutes there and finished in 162nd place. On Saturday was the crit, I got dropped with 2 laps to go, lost 4 minutes, and finished in 132nd place. Sunday was the final, leg breaking mountain stage: 105 miles with 3 major climbs. It was snowing. I got dropped in the first 10 minutes of the race, then spent an hour in the caravan trying to catch back up with the peloton. I did catch back on but got dropped again around an hour later, 2 miles from the top of the first major climb. I rode the remaining 40 miles through the mountains to the finish with a small chase group, who dropped me in the Pinos Altos with 10 miles to go. I lost 43 minutes, and finished in 93rd place.
I ended up in 96th place in the final GC, 1:46:13 off Levi’s time. 194 guys started the race, 101 finished.