From Neil: Strong Second place finish from Beto today. That is one tuff course. Three flat in the last part of the race finished me off in ‘what turned out to be 11th!’

From Doogie the Bloodletter: I think I shed enough blood for all of us last weekend.  Beto was an animal as always today.  I had Paula pass me at about mile 32, just to have a flat later on, she was looking awesome today. I was in a minor crash, nothing crazy.  Not sure where I finished, but I was happy regardless.  Your not joking about being a tough course.  That hill was relentless! 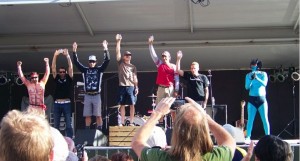 Beto the Brave: It was a blast racing with Neil and Dougie at the Whiskey.  Neil raced crazy strong and would have probably, for sure, finished in the top five if it weren’t for the mechanicals!  Dougie suffered an early race crash that definitely and probably took a lot to overcome, and with a bloody-rippen knee finished strong.

Paula easily beat all her competitors in the Women’s single speed.  Get that girl an Aggress jersey!     Whiskey Results