Bryan Schelgel, Elliot Anderson, and Kurt Garbe headed up to Phoenix this past weekend for the Valley Of The Sun stage race. The event featured a 22 kilometer TT on day one, a road race on day two, and a crit on day three. 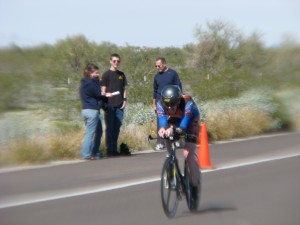 The road race contained a 2.5 mile sustained climb with a steep kicker right at the end, before flattening out for the finish. Bryan finished 18th out of 88. Elliot pulled off 13th, and Kurt 42nd out of 83 Cat. 4’s. Here is a snippet from Elliots report of the day:

“So, justin, kurt and I were poised, when kurt came and softly said, lets attack at the next “ease-up” and before i knew it i was on Kurts tail passing the front 5 riders and by the time kurt pulled over for my turn to pull the group was reacting.   2 procons guys started to go with us and the group didnt like 2 doubles (aggress, procon) trying to break so right away I eased up after kurt said “nope”. then, 5 secs after i eased one of the procons guys said “gogogo!!” and I did for a little before not wasting anything more and re-grouping.  Before I fell all the way back to draft, Kurt took a pull after the 2 procon guys and we both conserved before the final hill.  right before the last turn up the hill Kurt popped through a gap out to the right to be in the top 10 going around the corner which was great to be up front for the beginning of the hill.  Then, in a ridiculous display the dark skinned W.management rider leading us out randomly slowed way down, stood directly straight up with his hands on his hips as if saying “is anyone else gonna work, im doing everything”, i almost used the hilariously entertaining solution Kurt mentioned to use for any lacky riders the night before of sticking my pump into his spokes making him endo out of the pack.”

For the crit Bryan came in 52nd out of 72. Here is his recount of the event:

“I came into today 50th overall, moving up after pulling out a 17th in the sprint yesterday.  Pre-race prep was perfect, legs felt good, bike was stellar.  Raced the 80 other fuckers to the start for a spot in the 3rd row center. Crit started fucking fast and got faster.  I was totally red lined for the first 15 minutes, completely pumped out, able to do nothing but hang on and drift back in the pack on a pace too fast for me. I recovered a bit half way into the race and moved up with ambitions of being able to do so each lap.  The pace was so fast I could only move up in one 50 meter spot every other lap, and would continually fall off the pace on the climb each time around. The road was good, the corners wide, the group was predictable and felt safe. I fell off the back around 5 laps to go after giving the last big dig I had the lap before.  I tried to stay close hoping the pace would slow but the end of the group quickly disappeared from sight.  I was very quickly looking for the leaders approach from behind whilst time trialing to a non-lapped finish. I rode a lap or two solo before the referees whistled me off the course.  I shot Mr. Striped Shirt the dirtiest look I could muster before pulling off and out of the way.”

Elliot and Kurt both managed to survive a very fast Cat.4 crit, respectively finishing 14th and 21st out of 68. Kurt had this to say:

“In my oxygen depraved fugue during the VOS crit, I thought FB yelling at me was Elliot who finished, exploded or???? and I thought, “THIS IS IT!” I launched everything I had taking the sprint. As I crossed the line, the judge put up two fingers indicating the remaining laps… Fuck me… I grabbed the end of the group for a second or so and popped. My German pride got the better of me and I focused on not getting pulled or lapped. On my last solo lap I had a motorcycle escort with a sympathy clap from the crowd. If I’d hung with the group I just spanked, I would have finished 14th overall. Nice comfort… Y got a good laugh.”

*DVD of the three’s race to be released soon. Y doing a cardio time bomb starring himself.